Late in 1974, some Johnson grass plants were found in a maize crop in Hawkes Bay.

Johnson grass is one of the worst farmland weeds. Capable of rapid spread and of smothering crops. Its also a vector of Maize and sweetcorn viruses. -dwarf mosaic.

This NZ Jnl of Agriculture article describes the discovery of ,  characteristics of Sorgham halepense and actions taken to eliminate it and suggests methods of control.

Another  article was written-The potential menace of Johnson grass and  published in the NZ Journal of  Agriculture. 1975 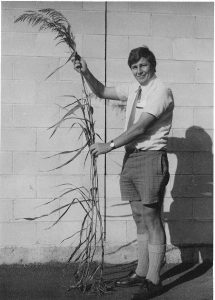